About the topic of time spend on Facebook posted two days ago (See post), Alcides, a friend of mine, point out that “although there are some high costs paid in a specific realm (productivity) the benefits in other areas might as well override those costs”. Specifically Alcides research is oriented to find “how SNS might benefit psychological well being, social capital, and community attachment”. This position is not far away from economic theory. The argument is that people are always looking for the maximum utility (happiness) they can get from allocating their resources, like time in this case. Thus, the estimate of $225 dollars per month based on the average of an hour and a half per person each day is just simply an indicative of the individual willingness to pay for being in touch with family and friends, in this sense, maybe is better to change the characterization of the phenomena from “social cost of gossip” for “social valuation of social networking”.
Notice that the figures provided are not giving any kind of information about when and where the time on Facebook was spent, home or work, day or night. This comment is just to rule out the possibility of link the use of social networking with changes in productivity, which is a different but interesting topic.
Publicado por Daniel Toro Gonzalez en viernes, noviembre 05, 2010 No hay comentarios:

Have you ever thought about the total amount of time people spend on Facebook?
I bet you have felt guilty because you spend too much time on Facebook, catching up with pictures and events. Well, don’t be too worried, because you are not alone. The use of Facebook has been growing exponentially, since its launch from a Harvard dorm room in February of 2004. The number of active users has increased by more than nine percent each month, since its creation through July of 2010, when more than 500 million people were registered as active users, each user with an average of 130 friends.
In terms of use, according to the statistics of the popular social networking website, people spend over 700 billion minutes per month on Facebook. Certainly this is a huge number, but how much is it in terms of one person? Well, it turns out that approximately half of the active users log on any given day, this means that on average each person spends an hour and a half (1 hour 30 min) on this social network every day. So are you contributing to the increase of that number? You don’t have to feel guilty if you come in under that number, are you?
In terms of the federal minimum wage, the time each person spends on this social network is equivalent to US$225 dollars a month or equivalently, believed or not, 7.19% of the U.S. total GDP in 2009. Is this the social cost of gossip? 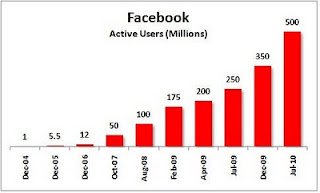